Can I use this material? Do I need permission?

Yes, you may use the research findings, and can do so without permission. The material is being provided by JAARS and IAMA so individuals and organizations can use it.

Before using the material from this website, please read the Terms and Conditions, which covers: use of the AER logo and photos, caveats and limitations, fidelity of presentation, non-alteration of the material, and formatting guidelines.

When using AER material, it is requested credit be provided as follows: Source: aerproject.info.

The AER website, as a whole, is copyrighted by IAMA. However, the individual pieces of research material it contains (e.g. the graphs) are not copyrighted.

I'm a financial donor. What material would be helpful to me?

As a financial donor, you might want to know:

The research was conducted a while ago. Are the findings still valid?

For example, if the time comes when women traveling unaccompanied by surface would not be harassed, robbed, or raped, then the findings pertaining to aviation’s benefit for women would no longer be valid. Likewise, if local, commercial operators of ocean-going boats adopt professional standards of seamanship and provide safe, well-maintained boats with basic amenities, then the findings on aviation’s relative effectiveness would no longer be valid.

Was financial cost a part of the research?

No, it was not. The goal was to adhere to the clear purpose of the study: to obtain an adequate understanding of the effectiveness of aviation at advancing people’s work. Accordingly, per the research proposal, all variables not pertaining to aviation’s effectiveness at advancing work were excluded. For example:

Many mission aviation organizations use aviation mainly to advance people’s work. Knowing aviation’s effectiveness at advancing work will help leaders make knowledgeable, kingdom-centered decisions about its use. The decision of whether or not to use aviation comes first in the process. If you know using aviation in a certain geographic ministry area (GMA) would be very effective at advancing people’s work, and that using it would be good stewardship, then financial cost, and all the other factors associated with missionary aviation, are subsequent; that is, they follow the decision about aviation use.

Does the AER determine the need for missionary aviation?

No, it does not; it only evaluated aviation’s effectiveness at advancing people’s work.

Did you interview nationals? If so, what did you find?

Yes, a determined effort was made to interview nationals. However, relatively few of them used aviation and relatively few were accessible for interviews. No nationals were interviewed in the ocean or no-mode contexts. As a result, 48 of the 324 respondents (14.8%) were nationals.

In all contexts for which data were obtained, nationals reported the trip detriment to be 52%; the expatriates reported 45%. This indicated nationals considered surface trips to be slightly worse than expatriates did, particularly with regard to the perceived probabilities of:

A purposeful effort was made to interview women, both married and single, as they also traveled and did ministry work. The research sought to hear their voices. As a result, 140 of the 324 respondents (43.2%) were female.

In analyzing the data from all contexts, overall, women reported the trip detriment to be 48%; the men reported 44%. This indicated women considered surface trips to be slightly worse than men did, particularly with regard to:

In terms of the amount of resources preserved by aviation (i.e. time, health, energy, safety, and security), 82.0% was preserved for women, and 81.4% was preserved for men. This indicates aviation was almost equally effective at preserving the resources of both genders, particularly in the road, trail, and no-mode contexts.

While the numerical findings showed aviation was about equally beneficial, when asked which gender benefited more from aviation, nearly all of the respondents indicated women did. In order of most-frequent mention, women were reported to benefit more:

The respondents themselves weighted their answers. Each response was someone’s subjective opinion, to which they gave a numerical value using standardized scales provided by the researcher. If something was more beneficial to them, or if it was prominent in their minds, they would give it a higher value (i.e. they would add weight to their answer).

For example, if they stated aviation was better for building, improving, or maintaining work relationships, they were then asked “how much better is air than surface?” Referring to the scale, if aviation wasn’t that much better than surface, they might have responded with “1” (slightly better). However, if aviation was really beneficial to them in building work relationships, they might have responded with “4” (tremendously better).

Doesn’t this research simply confirm what we already knew?

Regarding some aspects – yes. Regarding others – no. For example, many people associated with missionary aviation know it saves time and gets workers and their cargo to destinations in better condition. They might also be aware of other ways aviation benefits those who use it. However, they might not be aware of all thirty of its sub-functions, of all the specific ways aviation performs them, or of the numerical extent to which it does so.

For those aspects of missionary aviation previously known and understood, the AER provides both numerical and non-numerical findings to support that knowledge.

Where can I find information telling me when using surface transport would be better?

In addition, other research findings can be used to frame decisions regarding whether to use air or surface transport. By looking at the nature of the surface trip, you can deduce (or “reverse out”) the people and situations in which surface transport might be better.

Most of the findings show aviation is more effective than surface transport. Was this research done to validate, or justify, mission aviation’s existence?

No, it wasn’t. The purpose of the research was to obtain an adequate understanding of the effectiveness of aviation at advancing people’s work. It did this by contrasting air travel with surface travel. The researcher made every effort to fulfill the research purpose in an unbiased manner, as shown by the following:

The AER evaluated aviation’s effectiveness at advancing people’s work. How effective is it at things like advancing Bible translation or church planting?

This is a common question and a reasonable one to ask. The researcher took the opportunity provided by the AER to see what, if any, connections existed between aviation and accomplishing organizational goals, and between aviation and impacting the kingdom. This was done through the two exploratory questions.

With one minor exception, it was found all of the Ways aviation helped organizations accomplish their goals and impacted the kingdom fit within aviation’s functions and sub-functions. In other words, the connection between aviation and these two subjects was straightforward – it did so through its standard functions and sub-functions. In essence, aviation only provided transportation. And this makes sense, as aviation is transportation. 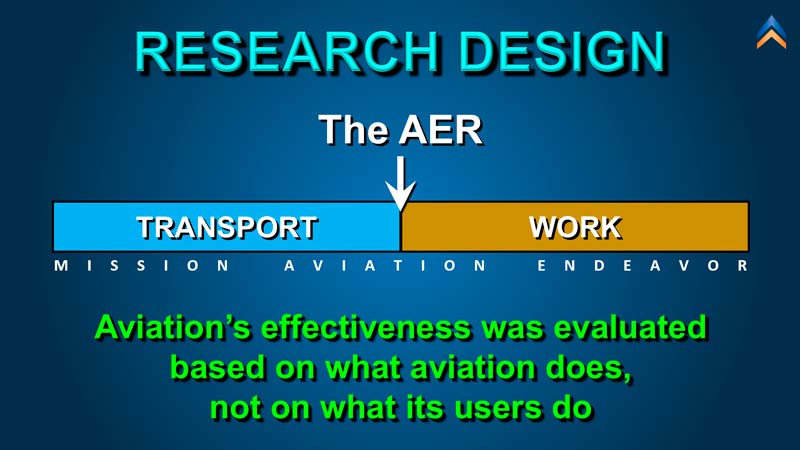 As the research shows, aviation gives workers a better opportunity to do their work by carrying out its functions and sub-functions. For example, let’s say a flight program provided excellent transportation for a team of Bible translators. It gave them every advantage by saving their time, preserving their health, energy, safety, and security, and improving their access. Yet the translators (for whatever reason) did not translate any scripture. Does that mean aviation was ineffective at providing transportation? Or that aviation was ineffective at giving people a better opportunity to do their work? No, it doesn’t. Therefore, the effectiveness of aviation cannot, and should not, be evaluated based on the effectiveness of its passengers. Rather, aviation’s effectiveness can, and should, be evaluated based on the transportation it provides.

No, it did not. At its core, the AER sought to assess the effectiveness of missionary aviation relative to surface transport. To achieve that goal, it was not necessary to make a distinction between fixed- and rotor-wing aircraft.

I don’t understand the graphs showing the amounts of health, energy, safety, and security preserved by aviation. Can you explain them?

(An explanation of the resources preserved graphs, and how the values were calculated, is provided in this video. The following is essentially the script.)

In the AER, health, energy, safety, and security are considered to be resources, resources that can either be used on transport or on people’s work.

Aviation preserves health, energy, safety, and security (HESS) better than any other mode of transport. Although it does not preserve 100% of those resources, it preserves more of them than surface transport does. In essence, it is the best we have in terms of preserving time and HESS.

The research sought to determine aviation’s effectiveness at advancing people’s work relative to surface transport. One of the ways it did that was by determining how much time, health, energy, safety, and security was preserved by each mode. The fewer resources a person uses when traveling, the more resources they will have available for their work.

Quantifying the amount of time and energy used when traveling was relatively easy, because we can measure time, and because people are used to thinking in terms of how much energy they have.

Every trip, whether by air or surface, requires some amount of health, energy, safety, and security to be expended.

To understand the math, let’s return to our example.

Quantifying the amounts of time, health, energy, safety, and security preserved by aviation in different transportation contexts enables us to make more-knowledgeable decisions about when, where, and for whom, to use or not use aviation worldwide. 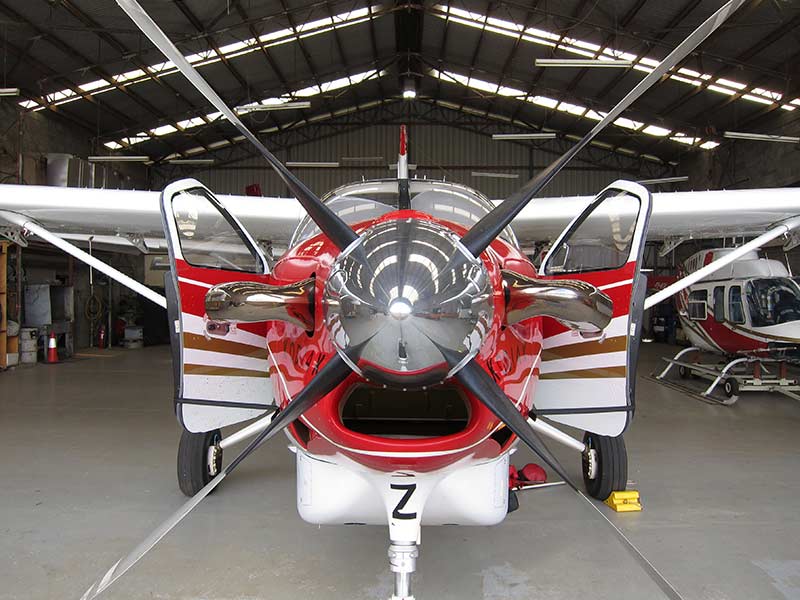 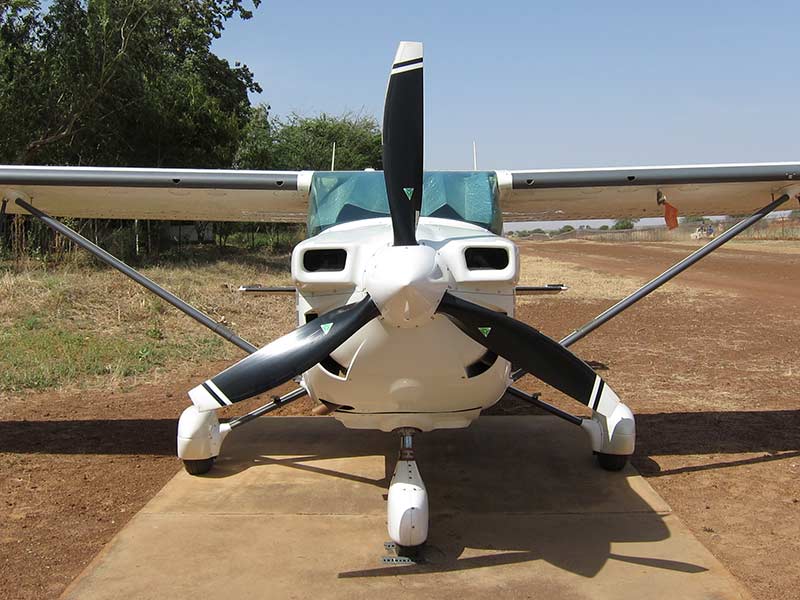